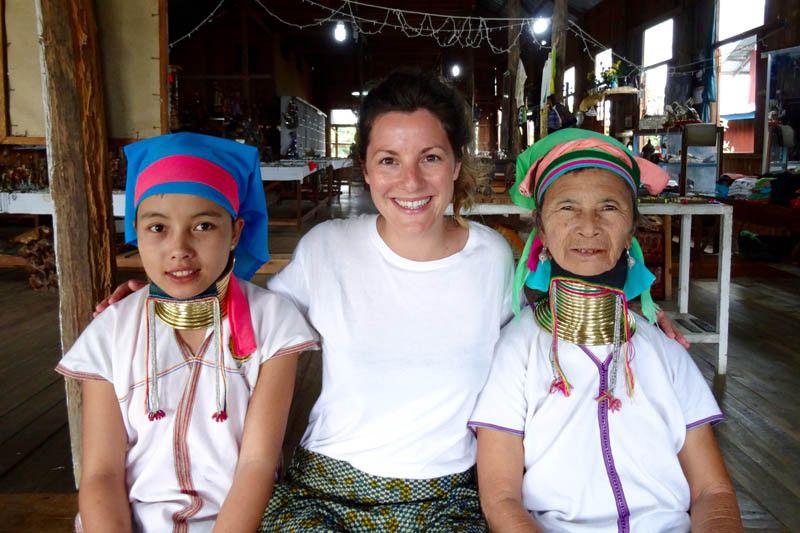 Myanmar is located in Southeast Asia, neighbouring Thailand, Laos, China, India and Bangladesh. It also has a coastline of almost 2000 km (1200 miles) along the Indian Ocean with tropical paradise beaches.
Many travelers are experiencing Myanmar (also "Burma") as pristine as no other country in tropical Asia. The buddhist country, which is rich in temples, fortresses and pagodas from the times of kingdoms and dynasties, did remain relatively closed to foreign travelers until 2011, because the former British colony was under the rule of socialist and totalitarian regimes from 1962 to 2010.
Only in recent years, Myanmar has opened up step by step for international tourism and differently than many of its neighbouring countries, therefore still offers countless possibilities for discoveries off the beaten tourist path. Be it Bagan, the historical town of temples, the monumental Shwedagon Pagoda in Yangon, or magic Lake Inle: Myanmar is a fascinating travel destination full of breathtaking sights and landscapes for you to discover!
Our main location in Myanmar is the former capital of Yangon (also: Rangun), which is the country's urban and cultural centre. However, we also arrange internships and volunteering options in other cities of the country, and in rural areas.
The international airport of Yangon (RGN) is relatively easily to reach, usually including at least one stopover. Within Myanmar there are relatively inexpensive domestic travel options including flights and buses, making it easy to reach all domestic locations.
Myanmar is considered a safe travel destination. Also as a single female traveler there is no particular risk if you follow certain basic rules. The country's language is Burmese, which is the native language of around 3/4 of all Burmese citizens, but furthermore there are numerous other languages of the 135 ethnical groups of Myanmar. In tourist areas and at your placements, you can typically communicate in English.
Even though Myanmar is rich in natural ressources, it is one of Southeast asia's poorest countries. Around one third of the population live below the poverty line, with many having an income of less than 2 USD per day. Further problems of the country are the lack of access to education and healthcare, corruption, and ethnic conflicts. Poverty is particularly prevailing in the border regions, in the central dry area, and in the settlement areas of the country's ethnic minorities.

Our locations in Myanmar

Our main location in Myanmar is Yangon (Rangun), the country's former capital. With more than 7 million inhabitants, it is not only Myanmar's biggest city, but also its urban, economic and cultural centre.

With its unique and largely intact colonial city centre, Yangon is regarded as the city with the highest density of colonial buildings in the whole of Southeast Asia.

The city centre of Yangon is located around the golden Sule Pagode, which is more than 2000 years old. The city is also home to Myanmar's most important Buddhist site, the golden Shwedagon pagoda.

Compared to other Southeast Asian cities, Yangon however lacks behind in terms of infrastructure. Particularly the outskirts of the city, and wide parts of the rural areas of Myanmar are still very poor and are lacking infrastructure.
Rural area

In rural areas, however still easily reachable from Yangon, we currently have two placement options: Farmwork near Mwabi and the Bhuddist Thabarwa Centre, which provides free simple accommodation.

In Myanmar we are offering a wide range of volunteer and internship placements from various fields, and we are constantly expanding our options. The current opportunities include volunteer placements and internships related to arts, design, marketing, medicine, therapies, nursing, social work, architecture, farming, and tourism.
We also offer you the possibility to combine your placement in Myanmar with a stay at one of our other Asian host countries, such as India, China and Japan.
You will find all internships and volunteering placements in Myanmar by using the main menu on the top of this website, or by using the Activity Finder.
Discovering the country

Almost all of our volunteers and interns are also travelling around the country to get to know Myanmar. Our team in Myanmar is happy to provide you advice about affordable trips, excursions and activities in Myanmar, and will also assist you with travel arrangements.
Log-In