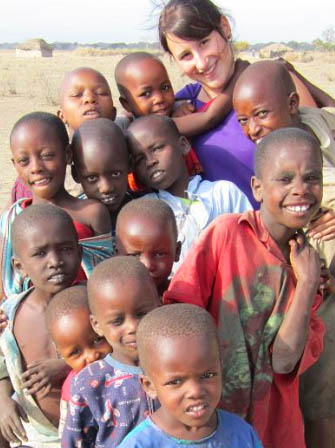 World Unite! offers the possibility of living with the Maasai! The Maasai village in which this is possible is only about 10 km from Kilimanjaro International Airport, and about 50 km from Moshi and 70 km from Arusha. You live in a typical Maasai house and take part in their daily life.
We would like to point out that, this is not an experience staged for tourists or an attenuated program, but the true Maasai life. As a guest, you enjoy preparing traditional food and experience food such as fermented milk.
Two Maasai villages, Laizer and Leronjo, started this initiative and have received approval by the Tanzania Cultural Tourism Programme for the Reception of Foreigners in April 2009; they are familiar with the needs and practices of foreign tourists and have been working with our partners ZARA Tours for many years in Moshi. In the village, there is cellular coverage and emergency medical care and the Kilimanjaro Airport can be reached in 15 minutes.
Read the following Article by Christina, who lived in a Maasai village for 6 weeks. 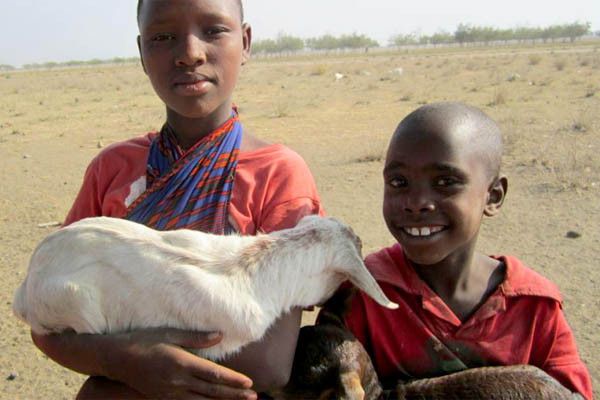 The Masai (or Maasai, Maassai) are nomadic herders that immigrated from northern Africa to East Africa towards the middle of the 16th century. This most well-known ethnic group in East Africa is now located in the Kilimanjaro region, both in southern Kenya and northern Tanzania. Currently, there are about 1,000,000 Maasai, equally divided between the two countries.
Originally, the Maasai were known primarily as a warriors and shepherds; the culture of the Maasai is mainly based on cattle. The rain god Ngai, perched on the summit of Mount Kenya, is said to have left to them by their faith, all the cattle of this earth. The Maasai believe this, and until until very recently, forcibly expropriated cattle from others. Even today, the cattle is the most important part of their diet.
They feed primarily on the meat, milk and blood from cattle, for their protein and caloric needs. The milk - blood mixture is a traditional Maasai specialty. Vegetable dishes are typically not eaten by Maasai. However, one can see Maasai who live outside the protected areas, resort to agriculture for their income, growing wheat, corn, beans, tea and potatoes. The traditional Maasai however, do not cultivate these but, buy them from other tribes.
There are no chiefs or leaders for the Maasai; they are organised by the age group of males. The transitions from one age group to the next are crucial moments in the life of a Maasai man and his reputation is very dependent on the number of cattle and women. It is not uncommon for a Maasai to have 50 cattle and five women. Numerous ceremonies, including the much criticised female circumcision, mark the life if the Maasai.
The traditional Maasai houses are round or rectangular depending on the region - but definitely built from a clay-manure mixture, which is similar to a half-timbered house attached to a wooden skeleton structure around. A fire is used for cooking and heating as there is no fireplace inside the Maasai house.
The Maasai speak among themselves their own language, Maa, which belongs to the group of Nilotic languages. However, most can also communicate in Swahili, which they have learnt in schools since the 60's.
In addition to language and food, many more features of the west are found in the everyday life of the Maasai. Maasai who go to college, download ringtones on their mobile phone, drive a car, write emails and play billiards and dance hip-hop in the city, are no exception. They do not give up their traditions, but mix them with others. Like no other tribe in Tanzania, the Maasai are faithful to their traditional way of life and benefit from tourism.
Especially for longer stays, it is is definitely advisable to read enough about the culture of the Maasai. We can provide a list of references available. 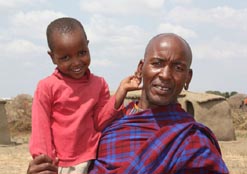 3 Days - 150 EUR
Each additional day 45 USD/Day
When staying for 1 month or longer: 25 USD/Day
Convert to USD, GBP, CAD, AUD and other currencies
﻿﻿
Including:
* Transfers from/to JRO Airport or Moshi for arrival and departure
* Accommodation in Maasai House or in a tent
* All meals 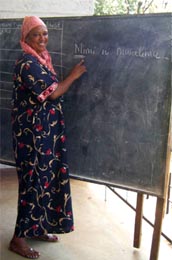 It is always helpful to know Swahili while doing your project here. Swahili is a relatively easy language for participants and some start to follow it within the first few lessons. You can choose the intensity of the lesson. We would, however, recommend a maximum of ten hours per week. The lessons are conducted individually; in some cases, 2-3 participants with similar levels of knowledge may be given combined lessons. The number of participants does not affect the cost of the lessons.
The cost for Swahili lessons: 1 Student: 10 EUR
Please check "Language Training Required" in the registration form and specify your desired duration (minimum 20 hours). 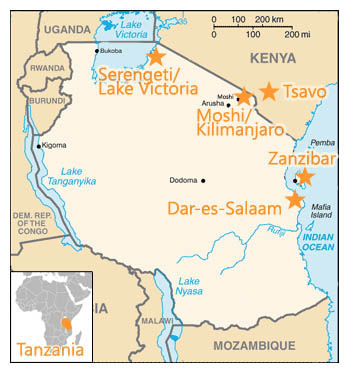