The "Centro Ecológico Akumal" (CEA) has been working for the protection and research with sea turtles at Akumal's four beaches in the Riviera Maya of Mexico since 1993, During the breeding season from May to September, you can participate in turtle conservation as a volunteer or intern. Also check out our video on this project! 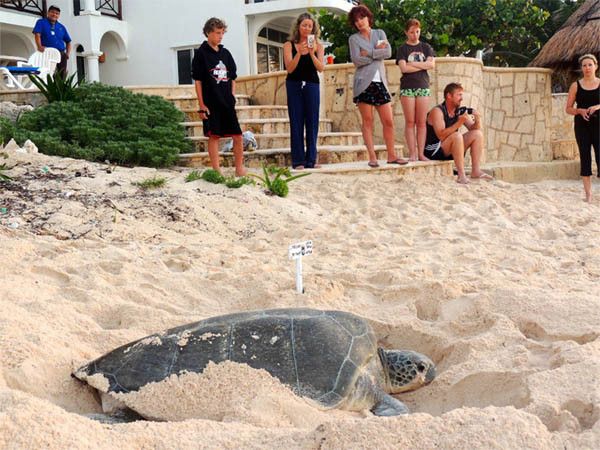 There are seven species of marine turtles on this planet, which all are either threatened or critically endangered. Mexico is home to six of these species, of which two nest at the beaches of Akumal: the Loggerhead Turtle (Caretta Caretta) and the Green Turtle (Chelonia Mydas).
Since 1993, the “Centro Ecológico Akumal“ (CEA) has been in charge of the protection and research of marine turtles at four of Akumal’s beaches. Since 2006, CEA has been monitoring young turtles in the Akumal Bay every other month. Turtles are caught in the bay around twice per week in order to mark, measure, weigh and examine them. The idea of the CEA team of biologists is to monitor the impacts of tourism and general pollution on the turtles’ health. If you want to participate in this activity you have to be a strong swimmer and not easily become seasick.
During the nesting season from May to September, volunteers and interns patrol the beaches at night together with CEA staff in order to protect female turtles while they are nesting, then, subsequently the actual nests and finally the hatchlings. Our video (see the link above) niceöy portraits this "Turtle Walk" activity. As the patrolling work at night can be hard, volunteers and interns should be in good physical and mental condition in order to be able to carry out the work on several consecutive nights.
As awareness-raising for tourists and locals is a main objective of CEA, volunteers and interns also assist with the preparation and implementation of awareness-raising events and the regular "turtle talks", informing visitors. These take place at the centre, which is located at the beach of Akumal, but also at public schools and other public places.
Participants who are experienced divers can join the coral reef monitoring program.
Previous knowledge in marine biology or about turtles is not necessary. Participants should simply have a strong interest in wildlife and more generally, in conservation. They should be able to communicate either in English or Spanish. Additionally, they are expected to be of adventurous mind, respectful of other cultures and able to work as part of a team.

Accommodation is in a simple dormitory near the turtle station. Here, about 12 persons of both sexes share the space. There is a kitchen that you can use, as well as Wifi.

The World Unite! Service-Package includes:
Prices DO NOT include:
If you want to participate in the monitoring of coral reef, you need to rent the diving equipment with gas cylinders for 250 USD/month.

The Riviera Maya, located in the Mexican state of Quintana Roo at the east coast of the Yucatan Peninsula, stretches from the city of Cancun in the north all the way down along the Caribbean coastline to the city of Tulum in the south which is a two hours’ drive. The Riviera Maya is the most developed region of Mexico, if not of whole Latin America. The International Airport of Cancun, a very good road system, and a well developed hotel infrastructure lay the perfect foundation for the region’s main source of income, tourism.

Breathtaking protected areas such as the Sian Ka’an Biosphere Reserve, more than 7,000 cenots (limestone sinkholes with freshwater) that can only be found here, various old Maya sites such as Coba, Tulum and Chichen Itza, small Caribbean islands with gorgeous beaches, or the excellent diving conditions along the Mesoamerican reef, which is the world’s second largest coral reef, make the Riviera Maya one of the most diversified and popular travel destinations in the world.

Akumal (around 1,200 inhabitants), meaning “place of the turtles” in Mayan language, is a beachfront village that has not yet been discovered by mass tourism. Akumal is conveniently located between the cities of Tulum and Playa del Carmen (each about a 30 minutes’ drive away) at the main highway that connects the Riviera Maya.

Akumal is a rather quiet place. As throughout the Caribbean coast of Mexico, you will find white sandy beaches and crystal clear waters that invite you to do snorkeling or diving. There are several traditional restaurants mainly serving freshly caught seafood and fish. Due to its convenient location and good infrastructure, you can easily and inexpensively reach all cities, sites and activities of the Riviera Maya by public transport or private bus operators. The city of Cancun (>550,000 inhabitants) has many bars and night clubs. Playa del Carmen (>100,000 inhabitants) is somehow more quiet, but also has a trendy party scene.

Mexico with its approximately 110 million inhabitants is officially situated on the North American continent. Surrounded by the USA in the north, the Pacific Ocean in the west, Guatemala, Belize and the Caribbean Sea in the southeast, and the Mexican Gulf in the east, Mexico is one of the world’s most impressive holiday destinations. Its great number of endemic plants and animal species make Mexico one of only 12 so-called “biodiversity hotspots” worldwide.

Mexicans are typically very proud people who enjoy their life to the full. This is expressed in the country’s colorful culture: Traditional music, dance, poetry, painting and dishes play an important part in Mexican life.

Mexico is a generally well developed country with a stable government. Of course, like in entire Latin America, there are parts of the country, which are underdeveloped and suffering from poverty. Mexico is considered a safe tourist destination. Only the border region to the US in the north and few parts of Mexico City should be avoided. The areas where we offer internships and volunteer options can be traveled to without any particular precautions, even by single female travelers.

Official language in Mexico is Spanish, but English is also widely spoken, particularly in the more developed tourist regions of the Caribbean Coast. Several indigenous languages exist in some rather secluded regions.

Numerous airlines connect Europe, North America and Asia with the airports of Mexico City and Cancun, some even with direct flights.

You fly to CANCUN, we pick you up from the airport.